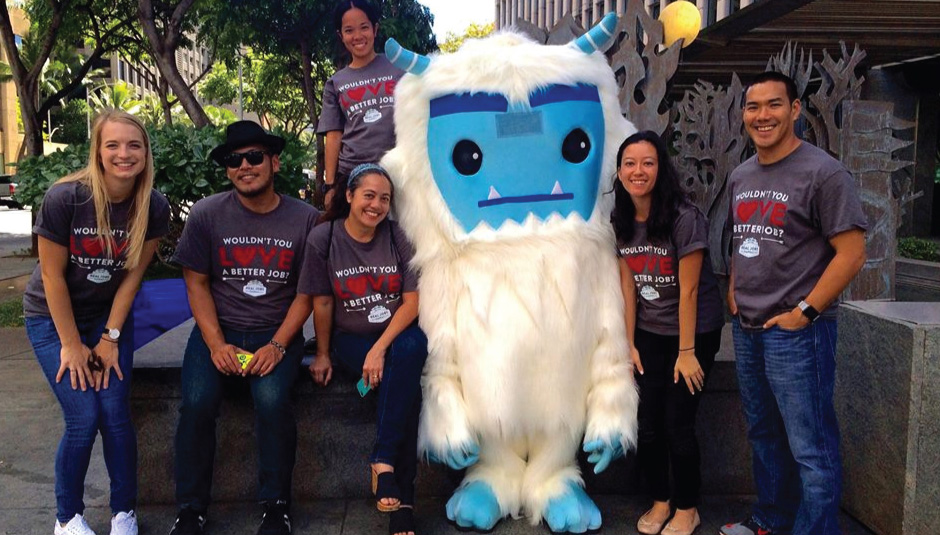 Misunderstood from an early age, the Yeti—or Steve as his few friends know him—longed to find meaning and purpose in his professional life.

Covered entirely in matted white and grayish fur and said to weigh anywhere between 300 to 400 pounds, Steve T. Yeti was a relative unknown to his classmates at Yeti College Preparatory School. As he grew older and entered the workforce, Steve—despite a frame built conducive to scaling the entirety of the Himalayas in debilitating snow storms and proficiency in Microsoft Excel—had difficulty finding fulfillment in his employment. By all accounts a reliable and dependable worker, Steve Yeti was looking for a change.

After scarcely a return email from other websites, Steve Yeti knew he needed to job search smarter. Enter Real Jobs Hawaii. The only online job board available that offers one hundred percent screened posts and local positions with legitimate companies in the islands, Steve Yeti began to think about moving to Hawaii. Steve was later shocked to learn that it was free to both jobseekers to apply for positions and for businesses to post positions. While initially skeptical, as Yetis are characteristically known to do—Steve T. Yeti did his research.

From his home cave in a remote region of the Himalayas, Steve Yeti used his broadband connection to learn about life in Hawaii. He signed up for the Real Jobs Hawaii blog and started receiving tips on how to better prepare his resume. Steve even learned about cleaning up his online image to appeal to employers, and while he’s still addicted to Instagram, long gone are the 3 am pictures on his Facebook page of the wild Himalayan nightlife.

Steve signed up for an account on Real Jobs Hawaii and started his journey toward satisfying and meaningful employment. First, Steve Yeti uploaded his resume and then used Real Jobs Hawaii to create a list of jobs he wanted to consider. With a click Steve even shared jobs that were better suited for his few Yeti College Preparatory friends. When Steve began to receive invitations to interview for open positions that was when he realized — it was time to move to Hawaii.

After several brief stints as a Lifeguard and later as a Dive Instructor, the Yeti Steve could feel himself growing in his journey toward professional fulfillment. He found himself improving his skillset and his resume grew with each experience. It was then that he applied for the newly created position of SpokesYeti at Real Jobs Hawaii—a position he found tailor-made to both his unique skillset as a Yeti and experiences in using Real Jobs Hawaii. Starting in the depths of the Himalayas and finishing on the white sandy beaches of Waikiki, Steve T. Yeti had come full circle in his journey to find meaningful employment.

While some scientists have questioned the validity of the Yeti’s existence, or at worse claim Steve to be a publicity stunt to increase web traffic, sleep easier knowing that Steve Yeti does indeed exist. Come see for yourself at the next Career Expo or Real Jobs Hawaii event and don’t hesitate to take a photo with him. Just don’t ask about how many friends he had at Yeti College Preparatory. It’s a sore subject.